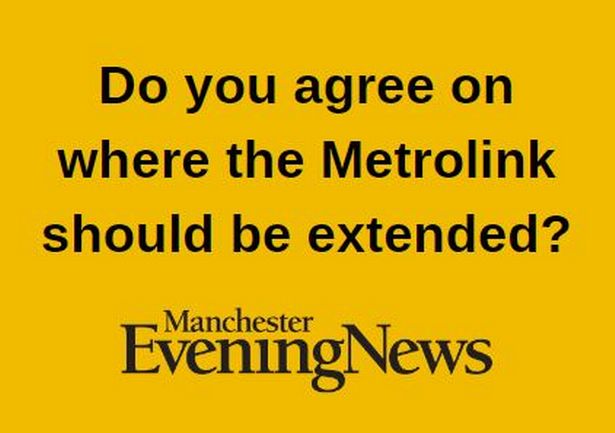 In the first week of December, we asked our readers where in Manchester they would like to see the Metrolink extended to.

It had been suggested by local leaders including mayor Andy Burnham that Wigan, Bolton and Stockport would be next in line for upgrades, with the three areas highlighted in as part of the Transport Delivery Plan 2021-26.

The question has been met with many responses, with lots of readers offering alternate ideas to the proposed boroughs.

Let us know what you think in the comments section.

There were some who were on board with the current plans, with one person responding: “A tram extension to Middleton, Bolton and Stockport would be fantastic. The buses aren’t really reliable.”

Another added: “Stockport obviously from East Didsbury down to Cheadle then along Stockport Road to Stockport. An easy win.”

There were also several calls for circular routes connecting the outskirts of Manchester, with one reader saying: “An orbital line linking all the major towns. Why should everyone go through the city centre to go back out again.”

More readers agreed, with one saying: “It needs a circular route connecting Bolton, Bury, Heywood, Rochdale, Oldham, Ashton, Stockport, airport and carrying on around the other side of Manchester.”

Another reader covered the opposite side, saying: “An orbital line through Walkden, Worsley, Trafford Centre, and airport! A line to parallel M60 to take some of the congestion is vital I think.”

One idea that also cropped up was looking at the city centre going into some areas of South Manchester, with one reader saying: “There are some areas much closer to the city centre that have to rely on buses to get into the city centre (e.g. Fallowfield, Hulme, Withington, Cheetwood, Miles Platting), which could easily be connected via a tram line instead, but they’re completely ignored.”

Others shared similar thoughts, with one person adding: “It should run to The parts of South Manchester with no Metrolink but congested traffic; Fallowfield, Levenshulme, Burnage, Longsight, Ardwick.”

Another reader in agreement said: “We need the tram to go to the central Manchester hospital site and the university. We also need extra capacity in the city centre so that if there is a problem the network doesn’t stop completely.”

Do you agree with what our readers are saying? Or do you think some ideas have been missed out? Share your thoughts in our comments section.

The youngest and oldest neighbourhoods in Greater Manchester revealed