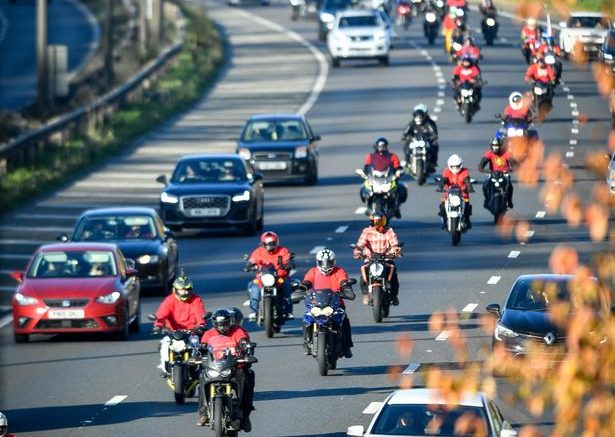 As the sun beat down over a crisp Autumn lunchtime in Stockport, the revs of engines could be heard across the M60. But this wasn’t the usual traffic on a weekend – this was thousands of bikers in red gear.

As part of this year’s Remembrance Sunday, thousands of motorcyclists from around the country came together on Sunday 13 November in a ride of respect. The ride, which began and ended near the westbound Birch services, saw the group ride around the M60 creating a ‘ring of red’ in a truly spectacular sight.

They were supporting Veteran into Logistics, a non-profit veterans charity, and showing their respect to the fallen.

READ MORE: Three arrested as man dies after being thrown from moving taxi in Blackpool

As a small group gathered on one of the many bridges located around the M60 to watch, in Stockport town centre, families and loved ones of the riders showed their appreciation in their droves. From the first biker wearing a red jumper and helmet to one of many army tanks covered in red poppies, it truly was a beautiful and poignant reminder of what Remembrance Day is all about.

Each group was released in staggered sections in order to not hold up the stream of traffic, meaning there was a constant flow of red riders as they made their way round. As they passed by the bridge they were met with cheers and waves, and in response beeped their horns, flashed their headlights and revved their engines.

Even some cars and lorries got involved, much to the delight of some of the small children watching with their grandparents.

The group set off at 1pm and could be seen around the M60, at one stage on both sides of the carriageway when they made their way back. Last year’s ride saw 4,400 motorcyclists gather – today saw over 5,000.

This is one of many rides of respect across the country, and they certainly did the Manchester proud.

Jeanette Kiely, 59, has been organising the event for the last nine years, and says this year will be the 10th anniversary.

She previously told the M.E.N: “I received a phone call from a woman from London who organised the ring of red there. She asked us if we wanted to do the ring on the M60. I said yes that’s fine. Now, it will be our 10th anniversary.”

“It has become a hugely popular physical show of support for the armed forces, both past and present.

“We are delighted to support Veterans into Logistics this year through donations from the sale of our merchandise, as every year we create Ring of Red M60 commemorative merchandise including T-shirts, flags and pin badges.”

COO of Veterans into Logistics commented on the event: “We can’t wait to be part of this incredible event on Remembrance Sunday. We thank Ring of Red M60 for helping to highlight and support our work.”

“Our mission is to reduce poverty and homelessness for veterans and the vulnerable by training and supporting them into new careers as HGV drivers.”

“With the funds raised, it will be going towards training veterans into their new careers.”

The idea of the event is to help create a ‘large poppy’ with the potential to become the largest in the world.

Residents at a care home in Cheadle were joined by local nursery children for a unique morning of autumnal fun. The team…

A resident at a care home in Cheadle had the chance to relive happy times on a Ferris wheel in Liverpool. Rick…

The unique five-bed property has just come on the market for £1,450,000 Manchester Evening News – Stockport …