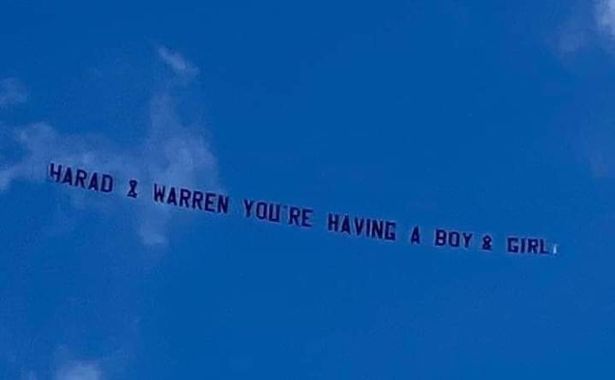 A banner revealing the gender of twins was spotted flying over Greater Manchester.

Warren Taylor and his partner Harad watched from below as the banner flew overhead reading: ‘Harad and Warren you’re having a boy and a girl’.

The couple, who live in Mere near Knutsford, had no idea what they expecting before the gender reveal party.

Warren said they were ‘over the moon’ as they found out the happy news on Saturday in front of their family and friends.

After the banner flew over, he added to the celebrations and proposed to Harad in front of blue and pink smoke.

The plane towing the banner was spotted by dozens of people across Greater Manchester, with people in Wythenshawe and Stockport posting about it on social media.

Warren, who works for a law firm, said he wanted to do something special to reveal the sex of their twins.

At first he thought about using a helicopter to reveal the news but decided on flying a plane overhead towing a banner.

He got in touch with the A1Partyman events company who organised the flyover.

“When we saw it coming over, the garden erupted into cheers”, Warren told the MEN .

“We had absolutely no idea. At the last scan, they popped the picture in an envelope and we didn’t open it.

“It was just such a surprise.”

After the gender reveal, Warren decided to surprise Harad again and proposed to her as they set off some pink and blue smoke to celebrate.

“It was a really special day and we feel lucky to have been able to do it with family and friends”, Warren said.

“We’re so very very happy that we’re having a boy and a girl.

The plane flew from Leeds over Greater Manchester and over the couple’s house in Mere.

Dozens of people spotted the banner across the region on Saturday afternoon including in Ashton-under-Lyne, Wythenshawe and Stockport.

"The community spirit in Stockport has been phenomenal." |Ma Evening Post…

The store in Cheadle Hulme, Stockport has closed its doors until next Tuesday, January 26. |Ma Evening Post…

The high rise ‘resi-block’ – boasting 98 apartments – is to be built on the pay and display car park between Piccadilly and Fletcher Street and opposite Regal House. |Ma Evening Post…