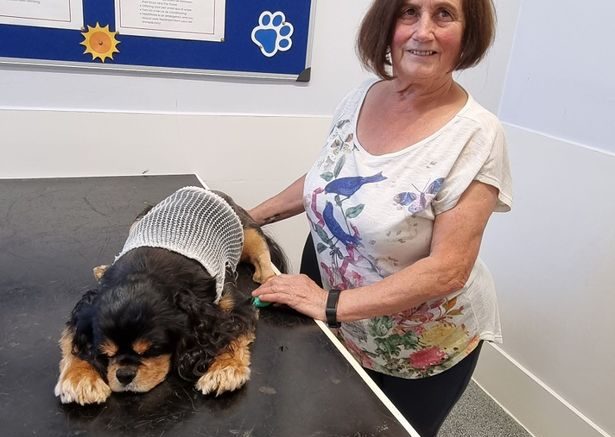 A traumatised dog owner is scrambling for cash to pay for vet bills after her beloved pooch was pulled under an Audi in a horrific hit-and-run.

Barney was struck by the black car just metres from Denise’s home, at around 11am on August 12. The driver, who slowed down as they passed by, appeared to ‘swerve’ and hit the dog as he took a step into the road, the Mirror reports.

His lead snapped in the collision and he was dragged under the vehicle. Traumatised Denise says she pounded on the car’s window, pleading with the driver to stop, but they ignored her and fled the scene.

She said neighbours up to 100 metres away could hear her dog’s screams, meaning the driver “almost certainly heard them too”. Barney was lying motionless in the road, which left his owner fearing the worst.

NHS worker Denise said: “He was rolling and screaming, then he suddenly flopped sideways and I thought he was dead. I can’t stop reliving it in my head.

“I picked him up and he started squealing. I sat down on some steps, as we were near my house, and phoned my son and said ‘get me to the vet quick’ and he came running across and we got him in the car.”

Barney had a series of x-rays which revealed he had five major fractures to his pelvis. His hip and left hind leg were dislocated from his spine. Multiple scans followed and Barney underwent surgery to reattach his leg and hip to his spine.

Denise’s son, Steve, 43, said: “They had to bolt them back on. They were completely snapped off the spinal column.”

The next day, Barney came home to recuperate in familiar surroundings – to the delight of their eight-year-old rescue bulldog, Bumble. “While Barney was away, Bumble was very agitated. He kept going to his bed and looking,” Denis added.

A GMP spokesman said no arrests had been made in relation to the incident, which happened at 11am on August 12.

Barney is now on the long road to recovery and underwent his first physiotherapy session earlier this week but the cost of vets bills following the accident has been huge. Despite having pet insurance, the amount Denise owes for Barney’s vet fees has gone into the thousands as he was only covered for up to £3,700 of treatment.

That has left Denise needing to come up with £3,000, which she does not have. She set up a GoFundMe page in a bid to raise the cash, initially asking for £2,000 – an amount that has since increased. To donate, click here.

The youngest and oldest neighbourhoods in Greater Manchester revealed